Many times, security leaders recognize that if we are not to deliver on our mission, something in our operation needs to change. At the same time, we will likely be confronted with challenges that stand in the way of affecting that change.

Some of the more common challenges that we face in healthcare are competition for resources, resistance by those who may not believe change is needed, or simply the inertia that comes from recognizing that change takes effort.

Throughout the course of my career, I have confronted each of these challenges, both singularly, as well as cooperatively. I write on this topic from the perspective of a four-year client and customer of Vistelar, and as the current chair of their Advisory Board. One led to the other.

My immense success with the Vistelar training program in the last years of my tenure in the healthcare space led to me assisting with their success. This stems from my belief that their conflict management training program is the best that I have seen. Throughout the country, workplace violence in healthcare is a significant issue and in need of high-quality training in the area of conflict management.

Over the years, I have used various change models to overcome organizational resistance to change. The one 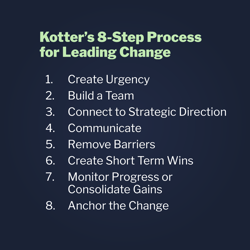 that I have found to be the most effective is Kotter’s 8- Step Process for Leading Change. A brief explanation of each step follows:

Advantages of this change model include that it provides a step-by-step process that can be followed relatively easily. The success of this model largely hinges on how effectively leaders and employees on all levels embrace it. The change is effective because it does not come from a decree, a new policy, or the boss saying, “Do it because I said so.” Rather, it comes from organizational collaboration, by creating buy-in and therefore, less resistance. Lastly, the emphasis on collaboration helps to develop champions of the change organically, potentially reducing the time needed to complete the change process.

However, there is no perfect “one size fits all” change model. This, like other models, has challenges. First, as a step-by-step model, it requires that all steps be employed. Skipping steps could result in delays and problems. Being a somewhat linear process does not mean that each step needs to be completed before the next begins.

In my experience, it is most effective when the steps have some natural overlap, like you can visualize using a Gantt Chart. Be mindful too, that it may be necessary to return to an earlier step when actions or processes in the current step are faltering and in need of a new jump start. Hopefully, this won’t happen often or the delay will contribute to another disadvantage: the length of time needed to complete the change. Individuals who bought-in initially may lose patience or become frustrated. Ongoing communication is critical, as the entire process unfolds.

There are four approaches that I have found useful in fostering change. I have employed these in support of the model discussed above when I have sought change over the years. Some have been large changes; some have been considerably smaller in scope, and some have been within my own department, while others were implemented organization wide. My large-scale projects included departments or stakeholders that were significantly impacted, while others were on the periphery of impact.

I have applied these approaches across a wide range of oversight including, but not limited to, staffing models, new technology, changes in services proved, and a significant change to the conflict management training for security and non-security personnel.

Faced with the ever-increasing challenge of violence being perpetrated against staff and patients and witnessing unsuccessful attempts by my staff to safely and effectively intervene, I looked for alternatives to our training program in this area. My goal was to “up our game” and find processes and training that could lead to that safer and more effective outcome.

Once I found the program that I believed would get us there, I began employing my approaches in support of the Kotter change principles. 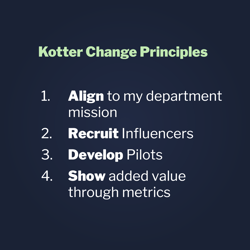 In summary, we have broadly covered an organizational change process by using Kotter’s 8-Step Process for Leading Change, combined with some specific approaches that I have used regularly in affecting change. Specifically, this was in identifying the need for and implementing a new training program.

To demonstrate how change can grow, in the last four years of my time in this organization- we moved from just changing the training for security staff, to providing a version of this training to over 50% of all staff; that’s roughly 17,000 people!

Next Article Be Alert and Decisive - Confidence In Conflict Book Excerpt

How to Increase Safety for Healthcare Security Professionals

Since the COVID-19 pandemic has entered our world, business as usual has changed drastically. Being...