Be Alert and Decisive - Confidence In Conflict Book Excerpt

Be Alert and Decisive / Respond, Don’t React (Be Ready and Stay Safe)

To officiate a game effectively, we have to remain alert, be decisive and have a pre-planned practiced response to conflict in mind. Have you ever seen an official that doesn’t seem to be concentrating during a game? S/he may be checking a cell phone (I’ve seen that too many times). Or they’re talking to a fan during play or during a break in the action. The hands in the pockets and the arms folded across their chest are also some signs of boredom, fatigue and being disinterested. You might say, “I do that but that doesn’t mean I’m not ready to officiate.” That’s debatable. That type of body language gives the players, coaches and fans an impression that you’re not ready, you’re disinterested and lazy. There is always someone watching what you do. By giving an impression that you are ready, you are engaged and you care, you positively impact your ability to communicate effectively. To better understand the concept of “awareness” during a game, we utilize a color code that assigns a color to each level:

As an official you should be in condition yellow, ready to make the call so you can move up to orange. Level orange means you are in position to make the call. You then move up to red, which is where you make the decisive call and/or decision. If you end up in condition black you are in trouble. This is when the conflict occurs and is not handled properly. This happens when you are not paying attention to what is happening during the game (everywhere around you).

In 2014, I had the privilege of teaching this program at the referee academy hosted by the Washington Soccer Referee’s Committee. I attended the breakout sessions, one of which was taught by Major League Soccer Official Bill Dittmar. Bill ran a drill in which he staged a 3 on 3 soccer game in a confined (much smaller field) area. No running was allowed and all of the players had to constantly communicate with each other just like they would in a game. There was a lot of talking going on. The area was surrounded by the other trainees in groups of two. One official in each group was told to face the field with their eyes closed and try to describe to their partner what was happening on the field — things like which team had the ball, were they attacking or defending, was there a foul, a goal, etc.? He called this the “Sounds of the Game.” The purpose of the drill was to pay attention to what is being said and done on the field, giving you a better feel for the game. In other words, listen not just with your ears but also with all of your senses. I was impressed. This is a concept that I had been teaching to umpires for several years. By listening to what the teams are saying, how they are relating to each other and what the coaches are saying to the players and officials, you can prepare yourself for any type of conflict that will occur. This helps you predict that there will be conflict, prepare you to handle the conflict and justify your response to the conflict.

Let’s take a look at a low frequency but high-risk area of officiating. How and why are sports officials 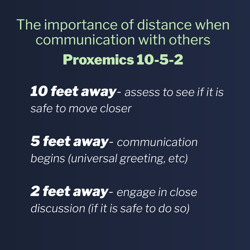 physically assaulted? It’s because they moved in too close to the player, fan or coach. Dave Young is a co-founder of Vistelar and one of the nation’s leading defensive tactics instructors. He is one of the nation’s leading tactical instructors. Dave created the 10-5-2 rule to understand the importance of distance when communicating with people. At 10 feet we are generally at a safe distance (providing the person is unarmed). At this distance we are assessing the person to determine if moving in closer would be safe. You are looking for signs of excessive emotional attention (yelling, screaming, profanities), and non-verbal cues that may indicate a possibility of assault. If your assessment indicates that you can move in closer, then you do so. At 5 feet you begin to communicate with the person. This may be an introduction (Universal Greeting will be discussed later) or you may be sanctioning the person (calling a foul, an ejection, a yellow/ red card). At 2 feet you may have a conversation with a player or coach regarding a call or ruling you have made. It is important to understand that the closer you move towards a person (or they move towards you) who is exhibiting aggressive and/or emotional behavior, the more unsafe the situation becomes.

Here’s a scenario: In a soccer game, a player receives a yellow card for a reckless tackle. The player has a reputation for aggression toward officials and other players and has demonstrated this during the game. The soccer official sees another serious foul committed by this player and then runs toward the player holding up a red card. The official moves into the 2-foot zone and gets punched in the face after presenting the card. This kind of bad tactic by officials can and has happened in other sports. Don’t move into that danger zone unless you are sure it’s safe and only move in if you feel it’s absolutely necessary.

There are times when communications will take place inside that 2-foot zone. There are also times when distance is determined by the other person who moves into your zone. What do you do then? When you make an assessment that someone is upset and may make physical contact with you, you should have your hands up to protect yourself. The best tactic is to have your hands above your waist (generally chest level) with open palms. The key here is to appear as non-aggressive as possible without sacrificing your ability to protect yourself. You can practice this tactic by having someone move quickly toward you (arguing a call). You simply place your hands out in front of you and say “Stop, what’s the issue?” You can also add in the “time out” sign. 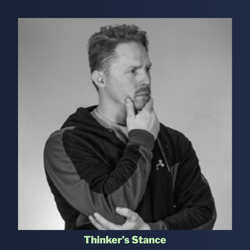 Another tactic that many officials use today is what we call the “thinker’s stance.” You place a hand on your chin and the opposite hand on your elbow. This position gives an impression that you are listening, which conveys empathy. It also keeps your hands up to protect yourself without showing aggression. There are many other tactics that can be learned but it is important to understand that whatever tactic you use to stop the person from moving aggressively towards you needs to be “meshed” with talking. Meshing is simply combining a physical skill, such as the “thinker’s stance,” with proper verbalization skills. You don’t train each one of these skills separately. Combining them has more impact on the person learning the skills.

Each sport has its own conflicts that can repeat from game to game. In baseball, it may be arguing balls and strikes, in soccer it may be offside calls, in basketball it may be traveling, in football it may be holding calls. Whatever sport, you hear similar things being said from coaches and players. So why do we have officials saying and doing unprofessional things in response to what is being said to them? It’s because they over-react to what is said. The rule to remember in these situations is to “stop reacting and start responding” instead.

If we can predict what will happen after a close call at first base or a holding call on a “big” play, then we should have a planned response. If we know that players, coaches and fans have been upset with us during the game, then we should plan our exit from the event. Your plan has to be thought out and practiced to be effective. As “Coach” Bob Lindsey says, instead of practicing “if then” thinking, you should practice “when then” thinking. “If then” thinking portrays a mindset that says “if this happen I will do plan A, B or C.” This puts you into a state of denial (“if ”) that any conflicts will occur during the event. If you practice “when then” thinking, you are simply saying that certain calls you make will provoke certain reactions. When that happens, be ready to respond with plan(s) A, B, C or even D. You will be utilizing a preplanned practiced response.

I conducted training for Transportation Security Administration (TSA) supervisors at one of the largest and busiest airports in the United States. Most of the students supervised the checkpoints at this airport. This is an area where the TSA agents have thousands of contacts with people on a daily basis. In preparing for the training, I asked them to send me a list of the worst things said to their agents during a shift. They sent me two pages of quotes that I considered verbal assaults. We spent a great deal of time scripting responses to these assaults that they hear on daily basis. The teaching point is to create your own scripts to handle the verbal assaults and outbursts. These scripts will ensure that you respond professionally when you’re under stress. We’ll talk about how to do this in the Redirection chapter.

Pete Jaskulski has been umpiring baseball in Wisconsin at the high school and collegiate level since 1981, receiving the Ken Kirby umpire of the year award in 2006 from the Wisconsin Baseball Coaches Association. He has umpired the spring state baseball tournament four times, three as a crew chief. In his training with the Wisconsin Umpires Association, Pete focuses on effective communications and game management. In 2014, Pete won the Wisconsin Umpires Association Umpire of the Year award. Pete works as a training consultant for Vistelar where he travels around the country providing instruction to various professions in Vistelar’s training program focused on how to communicate effectively in the midst of stress. He has led many workshops for sports officials on how to apply Vistelar’s methodologies to officiating. Pete is married to his wife, Pam, who was a collegiate soccer player. He has two children; Alex, a collegiate baseball player now working as a graduate assistant baseball coach and high school baseball coach and Kayla who is a multi-sport athlete (soccer, basketball, softball). Pete retired from the Milwaukee County Sheriff ’s Office at the rank of Captain after 24 years of service and he currently holds the position of Assistant Fire Chief for the Village of Hales Corners, Confidence In Conflict For Sports Officials which he has been with since 1981.

Causes Of Emotional and Physical Violence

If you have been following this blog, you are probably quite familiar with Vistelar’s structured...

I was passing through the Emergency...

How to accept and...
Read More