When I was in junior high school, we used to have to watch those corny “gateway drug” educational films. Do you remember those?

They followed a similar plot: Some clean-cut teenage boy would steal a beer from the family fridge; next we see him bowing to peer-pressure and puffing on a joint; soon he’s snorting cocaine at a wild party. Finally, he’s shooting heroin in some rat-infested alley. These films follow a similar plot and usually end with the boy’s parents identifying a body at the morgue.

“See, John?” the mother would say, “I told you not leave beer in the fridge!”

The anti-drug films of the ‘70’s, ‘80’s, and ‘90’s were melodramatic at best and ridiculous at worst. But they had an undeniable impact on impressionable kids like me – I was frightened to experiment with street drugs.

The validity of the gateway drug theory is still being debated, but its overall premise is undeniable: Bad behavior leads to worse behavior. If we don’t draw limits for behavior early in a relationship, we will suffer the consequences of rapid, dangerous escalation.

Who (or what) is in charge here?

In the institutional setting – whether it’s a school, a hospital, factory, shopping mall, juvenile detention center, or prison – the person with the worst behavior sets the tone for what is acceptable for everyone else. This is true no matter what example leaders provide.

But does allowing some bad behavior put us at risk for other, more dangerous, behaviors? Yes, it definitely does. We call these “gateway behaviors.” 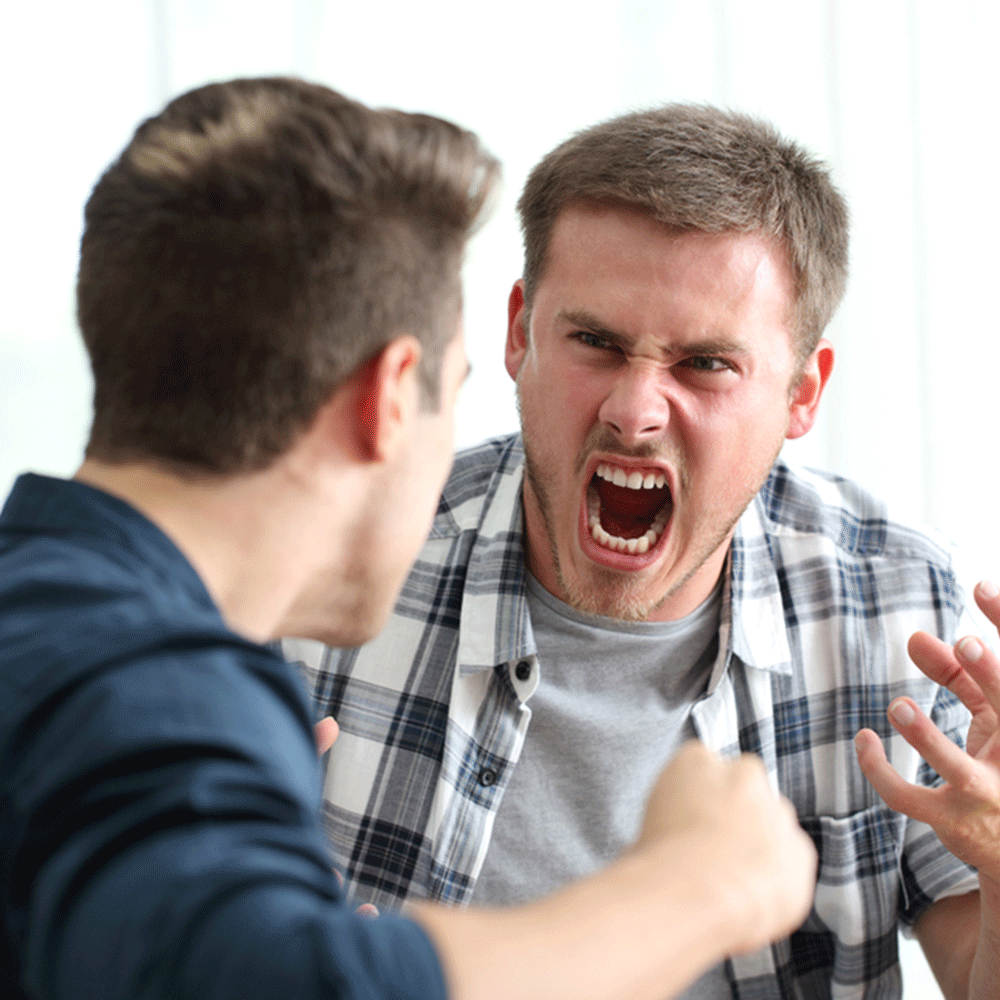 behaviors like staring, stern expressions, an angry or sarcastic tone of voice and other forms of body language designed to draw attention and establish dominance.

2) Verbal: The first verbal behavior we usually see is cursing. When someone enters an unfamiliar environment and uses profanity, they are searching for a reaction. For instance, many people swear, but most of them realize that saying “motherf**ker” in a library is offensive. In this context, curse words are like radar waves. The sender is seeing what signal he will get back from his peers and superiors. If the group ignores his behavior, the returned signal reads: You are afraid of me, or I intimidate you. All aggressive personalities test their opponents this way.

3) Veiled threats: Once the disruptive person becomes comfortable with swearing, they often graduate to veiled threatening behaviors and words. For instance, every teacher, nurse, or juvenile detention officer probably recognizes these types of phrases: “I don’t know what I’ll do if that punk starts up again!” Or, “Send that bitch in here again and see what happens!” One of the more creative veiled threats – a personal favorite – is, “I’ll be going to jail if she comes in here again!”

People who use veiled threats are consciously raising the ante. They feel bold enough to provoke a reaction with an implied threat. If we say nothing, then we embolden them to become more aggressive.

Once a person feels they will not be challenged if they curse, shout, and make implied threats, they will begin to feel they have established situational dominance. The reality is they are right. The people who failed to challenge them are now afraid of them and very unsure about what to do. This is when things really start to spiral.

4) Overt threats: If the relationship continues without challenge long enough, then the subject will begin to overtly threaten. They will say things like, “I’ll bust you in your face if you come near me.” At stage of overt threats, we have three problems. First, if we ignore the overt threats and comply with this level of intimidation, we are inviting them to escalate to actual violence. Secondly, aggressive personalities will actively seek more and more attention, services and goods from the individual or group they now control. Finally, any attempt to set limits at this stage will be all the more difficult to accomplish.

If you fail to set limits early on, you will have to ‘dethrone the leader,’ so to speak. Instead of controlling some stranger’s cursing, you now have to knock the king from the hill before they turn physically violent. The cycle is this: Cursing leads to veiled threats => Veiled threats lead to overt threats => Overt threats lead to actual violence. The longer you wait to set a limit the more danger you are in.

It is surprising what some facilities will tolerate – especially hospitals, clinics, schools, and social service agencies. People ignore negative behaviors for all sorts of reasons, usually out of fear of the individual who is behaving badly. Sometimes they fear judgmental or misinformed managers and supervisors. It is the job of leaders at any facility to give permission for professionals and employees to set reasonable limits for negative behaviors. Then they must train employees how to set those limits safely and effectively.

A great tactic for setting limits is the 5-Step Hard Style from Verbal Judo®: 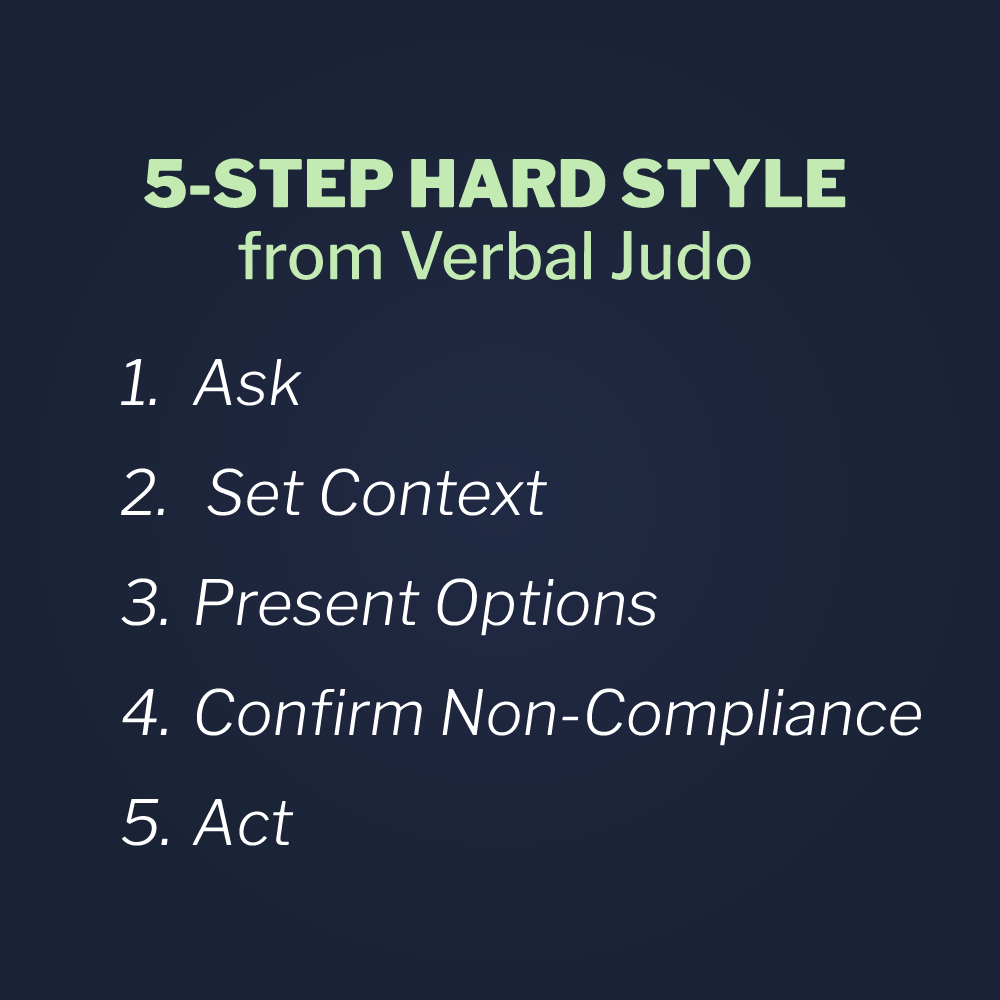 1. Ask: “Hello, I’m Officer Smith, the School Resource Officer. I have to ask you not to curse while you’re in school.” If this fails, go to step 2:

2. Set Context: “This is a school and we can’t curse here. I can’t curse and neither can you.” If this fails, then go to step 3:

3. Present Options: “We have a couple of good options here. I see you’re joking and laughing with your friends. You can stop cursing and go on to class with them and have good day. But if you keep it up I will take you out of class, and I will call your home and tell your parents about your language being the reason you’re in detention. Staying after school for detention isn’t any fun, is it?” If this fails, you might have to go to step 4:

4. Confirm Non-Compliance: “Is there anything I can say to get you to not curse on school property before I have to take you to my office?” If this fails:

5. Act: Be consistent and decisive. Tolerance for the little things makes the bigger things more likely. If you are perceived as weak or uncertain, you will be less effective as a teacher, SRO, or administrator and you will place yourself in greater danger for actual violence.

Think about it: You may not get a medal for controlling gateway behaviors, you might even get some flack for it, but in the end you and everyone else will be safer. 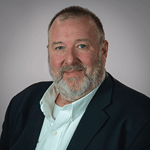 Next Article Psychological Safety at Work: The Number One Way to Improve Retention

If we had to open the heart of a nurse, we would see many things like compassion, empathy, and...

Personal Protection - Do You Know What to Look For To Stay Safe?

The old saying, “You speak volumes before the first word is spoken,” couldn’t be truer!  As a...

Controlling Your Space and Owning Your Environment- Book Excerpt