How Campuses Can Use Training + Expectations to Aid Suicide Prevention

College campuses are crowded places. From dorms and lecture halls to gymnasiums and dining halls, college students spend those formative years shoulder-to-shoulder. Is it still possible to be lonely and isolated on a college campus? What are the signs of loneliness, if it’s something other than just being physically alone? Most importantly, why do campus workers need to know the signs of isolation and depression?

Brooke was a shy kid in high school, and she didn’t have many friends, but she did well and got relatively good grades. When she told her parents she wanted to go to a college in a different city, they were encouraged by what they saw as a bold step, and supported her decision.

Brooke didn’t like her roommate at college, as they didn’t seem to have 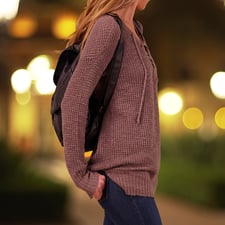 much in common. Even after a few weeks, Brooke hadn’t made any friends. Everywhere she went, she felt as if people were talking behind her back. Her roommate spent most of her time elsewhere. She studied in the library and went home every weekend. Brooke spent all her time in her room or in class, except for the once a day she got up the courage to go to the dining hall.

Her professors barely noticed her. She sat alone and never raised her hand. As day-to-day life went on at college, she seemed to just float under the radar. Brooke soon stopped caring about her appearance and people finally started to notice her, because of it. But that served to isolate her even more.
One day, the resident assistant for Brooke’s dorm heard her crying in her room. She stopped at the door to listen briefly, then just went on about her business. Soon, Brooke gained a reputation as “that girl” who cries alone in her room. Her roommate would sometimes wake up at night and hear Brooke crying softly in bed. She complained and was allowed to change her room assignment. Brooke would be without a roommate for a while and that suited her fine.

One night, Brooke did something very out of character. She went for a walk. It was a Monday night and the campus was deserted at 1:00 AM. Two young men were returning to their room after a long night of studying in the library, when they noticed her. As she walked past going the other direction, they said hello, but she didn’t answer them.

“Wow, what’s with her?” one of the young men asked the other.

“She seemed kind of weird. I hope she’s okay,” the other replied.

As they walked, they discussed the young woman’s behavior. Had she just snubbed them? Not likely, because she seemed withdrawn and looked like she had been crying.  Something about the girl's behavior or maybe the look in her eye set off some alarms in their heads, so they just couldn't shrug their feelings off.  Seeing that she was now out of sight, they decided to call campus police.

Within a few minutes, a patrol car was dispatched. Soon the officer saw Brooke sitting on a concrete fence and staring into space. The officer decided to park his car down the block and walk to check on the young woman, so as not to alarm her.

“Hello, I’m Officer Tom Langston, with Campus Police. I stopped by because I saw you out here by yourself and I wanted to check to see if you’re okay. How are you this evening?”

The officer noticed that Brooke didn’t seem concerned that the police stopped to talk to her. He also noticed that she didn’t look at him. He also knew that being there alone at night wasn’t illegal and there wasn’t much he could do about it, if she wanted to be out late by herself.  Or was there?

Before long, something happened. Brooke had made a friend, of sorts. Tom had spent more time talking with Brooke than any other person on campus ever had. He showed interest in her life and well-being. Then something really miraculous happened. Brooke handed over the bottle of pills she intended to swallow that night.

Where would Brooke be now, if it weren’t for that campus police officer? What if those two young men had just blown her off as being rude, instead of trusting their instincts and calling the police? A lot of people had dropped the ball, where Brooke was concerned, but on the night that saved her life she met three people who cared enough to ask a few questions and take a few steps in the right direction. Campuses are made safer when people take steps and ask the right questions.

Suicide is the 10th leading cause of death in America, but it is the 2nd leading cause of death among college students. Colleges are rightly taking steps to reduce suicide on campus, but to make a real impact, training and expectations must be implemented to have any real impact. To accomplish this, we have to ask ourselves a difficult and uncomfortable question: are our college campuses compatible or incompatible with suicide? To make campuses less compatible with psychological and emotional crises, we need to take some concrete steps.

To address a social problem, it has to become part of the essence of a community. Awareness campaigns are

great, but they aren’t the entire answer to making a social contract that is incompatible with suicide.
Therefore, if we can agree that campus suicide is a priority problem on campuses, every job description for everyone hired to work on a college campus (and I mean this literally) should contain a section with a paragraph like this one: “Responsibility: Respond to the signs and symptoms of depression, isolation, emotional crises, and intoxication as trained, and institute designated safety measures immediately.” Then train everyone and have the response mechanisms in place. Because not every Brooke is going to bump into two well-leaning young men and a well trained police officer, every time they reach their end.
Want more information on this topic or to learn how to set up a complimentary introductory session with you and your team online, please click here.

Even in a Dark Alley, You’re Safe with Us

When we think of basic human needs, hierarchies often come to mind. What is it that people need and...

Listening to the Hand

Although much of crisis intervention or de-escalation concentrates on the spoken word, the reality...

Pay Attention So You Can Respond - Book Excerpt